A once in a lifetime experience for racing fans!

The British Racing Club members were treated to an incredible day out recently when they visited the beautiful Upton Viva Stud, near Banbury in Oxfordshire, the home of Grand National and Gold Cup winning owner Robert Waley Cohen. This would be a dream come true for any racing fan, and we couldn’t believe our luck when the invitation came our way. Robert leases us our mare with Olly Murphy, Oakley Dancer; the main purpose of the visit was to see her while on holiday at the stud, which would have been a treat in itself, but we were spoilt with so much more!

After a delicious lunch at a local pub, we travelled the couple of miles to the stud and convened by a field full of broodmares and foals before heading into the yard to meet Robert. The fantastic team of staff at Upton Viva had prepared a short parade of horses for us, which was kicked off by none other than Gold Cup and King George winning Long Run, who looked absolutely fantastic at the age of 17!

Next up was a carefully formulated quiz question to challenge our knowledge and perceptions! Robert presented four horses to us, and without naming or identifying them individually, described them as follows…

We were then asked to pick which horse we wanted to take home. The final one of the four was the most beautiful, striking looking horse imaginable and was picked by almost everyone. Robert gleefully told us that this was the “completely useless” (but much loved!) animal, and the two very unremarkable looking horses were this year’s Grand National winner, Noble Yeats, and former runner up Oscar Time! It certainly made us all laugh and showed us how difficult it is for trainers and bloodstock agents when they are looking to buy unproven horses at the sales!

After seeing some more of Robert’s former equine heroes in the barn and asking a multitude of questions, we headed out to the paddocks to see our own Oakley Dancer, who is currently on holiday at Upton Viva for the summer. She looked fantastic and we were all delighted to see her so happy in a field with lots of other mares, all also on their summer holidays!

After seeing Oakley Dancer, it was time to see her mother and some of her siblings! We were taken round the fields, seeing some amazing broodmares and their progeny. We met some outstanding racemares and there was some definite card-marking for when the young stock hit the racecourse! It was fascinating to see the similarities and differences found within the families, with Stravinsky Dance (dam of Oakley Dancer) and her foal looking very similar to our mare, and with similar temperaments to match. It was hard to drag the British Racing Club members away from the field of mares and foals (very sweet, and some VERY naughty!) but the draw of seeing some beautifully bred yearlings and two year olds did the job.

After touring the stud for a couple of hours, we finished up with tea and cake with Robert and his wonderful team. This offered further opportunity to ask questions about life on a working stud, and some fascinating stories were told. It was a truly brilliant day and it was most generous of Robert and his team to host us.

One of the unique aspects of the British Racing Club is the wide variety of events organised for the members. From stud visits and museum tours to picnics at racecourses and private hospitality boxes, there is always something to look forward to along with the monthly stable visits. When combined with plenty of trips to the races to watch our horses run, it makes for a busy racing calendar! 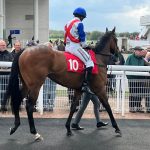 The BRC is back – a review of our first runnerPublic, Uncategorised